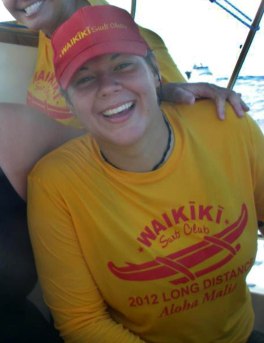 Koethe is one of the captains for her canoe paddling team, a full-time honors student at UH Manoa, and a member of the Biology Club. She is also the Vice President of ASUH and on top of all of that, she is also a dance instructor at Rosalie Woodson’s Dance Academy.

At 7 a.m., Koethe’s day begins. She quickly gets ready for her day and grabs a breakfast bar. She walks to her classes no later than 8 a.m. Aside from class, she also goes to the ASUH office to help students develop their leadership skills. After her academic day ends, she heads off to paddling practice.

Practices begin at 5:30 in the afternoon. She and her team run for 45 minutes on the beach and then after that, they hit the ocean. Koethe spends anywhere from two hours on weekdays to eight hours on weekends, paddling in the water. Although Koethe is dedicated to the ocean sport today, it was a different story when she was younger.

“When I first started paddling, I was afraid of the ocean,” Koethe said. “Some kind of string or something got stuck in my neck and pulled me into the shore.”

This experience prevented Koethe from paddling, so it wasn’t until her sister Anna started paddling, that Koethe put her worry aside and moved forward from her fears of the ocean.

“I realized that I was gonna be in deep ocean, but it didn’t hit me until we had to do water sprints,” Koethe said. 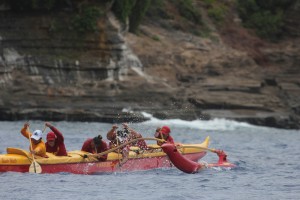 Koethe practiced by spending more time in the deep ocean where she grew comfortable swimming in deep water. Over time, Koethe’s fear of the deep ocean vanished and she can now handle ocean waters, swells, and catching waves with ease by herself.

On top of her fear of the ocean, Koethe had to overcome the difficulties she had with her paddling stroke. Canoe paddling requires all paddlers in the canoe to be skilled with their stroking- making sure that the paddle enters and exists the water at the same time as the other paddlers in the canoe.

“If I messed up, then the rest of the boat is messed up,” Koethe said. “The five people in the boat with me can feel it, but you want [the boat] to feel like super smooth [on the water].”

Paddling requires lots of skill and power and perfecting one’s strokes can take many years, according to Koethe. While paddling on the team, Koethe was asked to take on another challenge: the challenge of steering the six man canoe.

At practice, Koethe had to overcome yet another obstacle. She practices four days a week at the Ala Wai Canal. It’s known for its filth and there have been incidents where people have fallen in.

“The first time I was paddling, [the water] splashed in my eye,” Koethe said. “You know you can’t stop.” 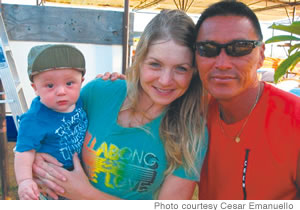 Al Streck with Carissa Rosenbohm and their son

However, Koethe would not be paddling if it weren’t for her inspiration: her coach, Al Streck.

“He was probably one of the major figures in my life, for growing into a leader and a better paddler,” Koethe said.

I thought I had lost all my drive for paddling,” Koethe said. “When Coach Al passed, that was a big emotional and mental problem for me.”

The following season after Coach Al’s passing, Koethe was unsure if she even wanted to paddle anymore. But she continued to push herself. 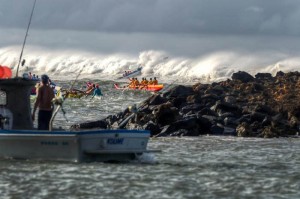 She changed her mind set and continued to paddle and train for Na Wahine o Ke Kai , a more than 38-mile long race from O’ahu to Moloka’i through the Kaiwi Channel. Her team finished the intense race in sixth place for the women’s division and Koethe dedicated her season to her beloved Coach Al.

As Koethe was about to finish her race, she sensed that Coach Al was with her. Koethe came to the realization that paddling was no longer just  a sport- it was more than that.

“I try to remember that he’s looking our for me, and that he wants me to keep going with this,” Koethe said. “He was like our second dad. It’s just an extra drive and that drive pushes me to go further with  this sport.”