HONOLULU—While some people get an education to work in the corporate world, others have decided to become their own boss.

Sumner Ohye, owner/founder of The Curb

However, Ohye’s success did not just grow overnight. Before The Curb had a physical location on the UH campus, it was located on a mobile food truck.

Once Ohye purchased the truck, transporting it to ʻOahu was a task in its own.

According to Ohye, one of the hardest things about being an entrepreneur revolves around the cost of goods in Hawaii, compared to the mainland.

“All of our costs coming in are more, our electricity is more, and then the retail price is almost the same,” Ohye said. “So our cost of goods run anywhere from 15-20 percent more than the mainland competitors, when we have the same retail pricing.” 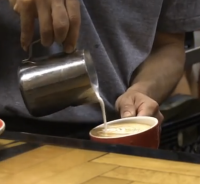 Cup of coffee from The Curb

Ohye thinks that the economy in Hawaii is sheltered because of its captive audience.

Being your own boss

Ohye worked at Nordstrom for some time before getting into the coffee business. He said that because he’s a business school graduate, becoming an entrepreneur felt natural.

“I just felt I wanted to do something really cool, but not have other people tell me what to do,” Ohye said. “Just have full control over the product and the experience,” Ohye said.

Even though Ohye already has two different locations on the UHM campus, he said he hopes to have a location off of campus as well.

“I feel bad for the people that followed us in the truck because you have to pay for parking on campus,” Ohye said. “I feel we’ve alienated a lot of our long-time customers and people that really helped us get started.”

Although Ohye’s coffee shop seems to be doing well, entrepreneurship may not be the best business move for everyone.

Traczynski thinks that it would be difficult for local businesses to succeed in today’s economy.

“I think you can [succeed], but I think it’s harder than it would’ve been, say in the late ’90s to do so,” Traczynski said.

According to Traczynski, there can be a financial downside in starting a business.

“It can be very hard for owners of small businesses to protect their personal assets,” Traczynski said. “So if for whatever reason the business doesn’t succeed and now you know, you had taken out a bunch of loans, banks will come after your house.”

However Traczynski said that small businesses have the capability of expanding Hawaii’s employment.

Ohye, a graduate of the University of Washington, focused on entrepreneurship while in school.

Even though Ohye had business school experience he doesn’t think every entrepreneur is required to have that.

“I think having an entrepreneurship background is good,” Ohye said. “I think if you have passion and commitment, you can pick up those other skill sets pretty easily, whether you take additional classes or just resources online.”

Ohye has come a long way since The Curb was still mobile.

The Curb is moving into its second year on the Mānoa campus.

“Now it is, I’d say more than three times our best-case scenario,” Ohye said. “So far this year, we’re having good traction, slim down the menu a little bit, but our food has expanded, and our sales are up this year quite a bit.”

Employees of The Curb working

Ohye said his favorite part of owning his own business is being around people he enjoys.

“Everyone at The Curb, we’re pretty tight,” Ohye said. “At the end of the day, you love them to death, you couldn’t imagine them not being there.”

The employees of The Curb spend time together after hours as well.

“We go hang out, we go rock climbing, or we go barbecue or we’re going to the movies,” Ohye said. 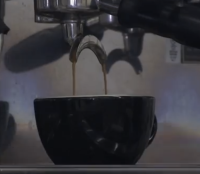 Coffee in the making

Ohye also enjoys the fact that they don’t have contracts with any vendors.

“By doing so, if we feel something’s not meeting our quality standard, we could change it,” Ohye said. “We could change roasters, we can change origin, we have this opportunity to shop around for a product we want to serve.”

Words to the wise

Ohye also had words of wisdom for others thinking about starting their own business. Ohye said that a student ID is very important.

“You can pick up the phone and call someone and say ‘Hey I’m UH student, I’m really interested in what you’re doing, can I do an informational interview with you?'” Ohye explained. “You can make a lot of great connections, and you can learn a lot that way, from people that normally you wouldn’t be able to touch.”

Ohye said that students should network while they’re still in college.

“After you graduate, you walk across that stage, you pick up the phone everyone thinks you’re just trying to get a job and you can no longer grab lunch with these people you find inspiring,” Ohye said. “So I’d say take advantage of it– talk to as many people as possible, network.”

According to Ohye, connecting with people through Facebook is impactful as well.

“First day of class, okay you start adding people, but after that class is over, do you follow up with people?” Ohye questioned. “Are you the one that’s always trying to help people out, connect with people? I think that’s what people should be doing while they’re in school.”