KAILUA — Gyotaku brings its popular brand of Japanese fare to the Windward side.

Hoping to better accommodate Windward customers, Tom Jones, president and co-owner of Gyotaku, decided to set up shop in Kailua.

Opened in early 2014, the Kailua location is the newest addition to the Gyotaku Japanese Restaurant chain.

The restaurant name, Gyotaku, refers to the traditional Japanese art form of fish printing, in which a real fish is painted with black ink. Then, the artist takes a piece of paper over the fish, and rubs it until the image is transferred (and preserved) onto the paper. The restaurant showcases various pieces of gyotaku artwork from local artist Naoki Hayashi.

However, the restaurant’s kanji (the Japanese characters that spell out its name) for Gyotaku are a play on words. “Gyo” means, “fish,” and “taku” means, “rubbing,” but co-owner Toy Sato switched out the “taku” kanji, and replaced it with a different one. The replaced kanji happens to be pronounced the same, but has a different meaning, and means, “table,” instead. So the combined kanji characters actually translate to “fish on the table,” which pay tribute to what the restaurant serves. 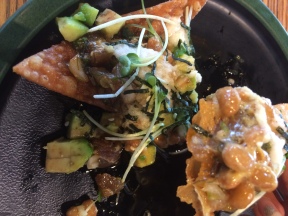 Jones is a graduate of the Culinary Institute of America, and also trained in Japan as a chef. Gyotaku’s menu features some of Jones’ own recipes, one of them being the “Nattochos.” The delectable appetizer consists of wonton chips, topped with natto or fermented soybeans, spicy ‘ahi and onion poke, avocado, yama imo, green onion, daikon sprouts, nori and sesame seeds.